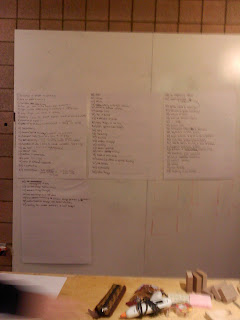 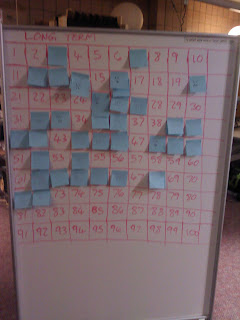 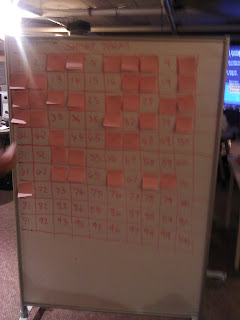 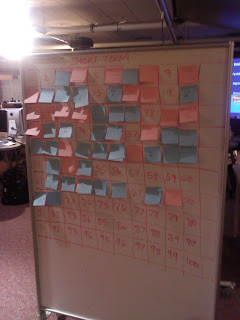 This has been a long time coming, here is what we have been up to for the past month.

We kicked off the start of the final project with a reverse brainstorm of the problems we thought were pertinent with our specific project. (First image) It was a quick secession of listing ideas that we thought could have issues later on in the project. The group came with eighty different possibilities ranging from financial blunders to aesthetics, construction, and feasibility of our design. Ranging from that we picked the problems that we considered long term and short term problems. The blue was marked as long term and the pink was short term. These series of exercises encompassed the span of the 6hr class. Then as a group we met on the next day, Wednesday. As a group we went over the entire list again, one problem at a time and discussed as if this was something we could feasibility manage within this one month of design and construction. Trying to solve the community issues is not a pertinent problem.

Making a second trip back to Detroit, Stephanie and myself went around the neighborhood and talked to whoever we cam upon the street. We talked to them about the powerhouse and and their opinion of it. Most people referred to it as Mitch's house more so than the powerhouse. People knew the couple were good people but most people did not know what was going on with the power house, except it was the house with the crazy green roof. We talked to the community about our ideas and aspirations for the project. Some people were intrigued about the fact it was a security measure because there is only one light on the street. Most of the people were not that interested at all, but everyone was friendly and willing to talk.

We then meet on the that Sunday to go over what we wanted this project to do. We concluded that having a mass multitude of something would serve our purpose the best. Concluding that 300 stalks of pvc would be the best bet. The only problem then was this idea of the lever arm. That the longer the stalk the easier that it would be to break. We had to pour a mock up piece and hit it with a bat, these were the result we saw. We first bent the pvc to see if it would fail, and surprisingly it did not. Bending it enough times it did kink. When it came to testing and the way the pvc did break that it was a hazard. The pvc broke in a way that was undetermined and not uniform. Which begged the question to we design this knowing it will fail that we design each stalk with some sort of moment that if it was broken, or were to break. The break would be clean and predetermined by us and there would not be any point shards. Also the pvc was way to easy to break. While hitting the pvc, only the outside two of the line of three broke. The outside took the blunt of the force, but if we were hitting it from the face, across all objects then the force was dispersed all objects and none broke.

After our series of testing we came up with a list of aspects what were essential to the construction of the piece:
adhesive
PVC
ploycarbonate
allot of crap
little of nice
sandblast
capping
pir proximity
pir cone
functions
T connection
drilled connection
secured by a screw
actually in the ground
stalks per unit
how many stalks per unit
linear distribution
arrayed distribution
stalk heights
how to wire
how much wiring
lights at bottom of tube
light at top of tube
wave guiding
etchings on the tube
spray paint

Going through the list and another series of testing these were the conclusion. Using spray paint on the pvc was not the best choice, the finish was not clean and uniform. Using gray pvc was ideal over the white pvc. In terms of cost and that the light did not shine through the gray pvc as it did the white pvc. Placing the light at the top of the stalk was the best orientation because having the light at the bottom, the light diminished when it got to the top even for a 1' length. We decided to do little of nice and allot of shit. So we chose the polycarbonate because it has a higher resistance to vandalism ad it looks much nicer. We decided on 2' stalks mostly because the stalks are shipped in 8ft lengths, anything else would be a plain waste. We decided to keep it simple, no etching on the tubes or spray paint, clean and crisp. There was no need for wave guiding because the light was placed at the top of the stalk.
The questions that still need to be answered is:
adhesive
finish
joint connection
pattern distribution
capping
pir distribution
stalks per unit

Then because we decided to use the polycarbonate we have another list of problems that need to be addressed, reason being that the polycarbonate is clear.
sandblasting
joint connection
capping
hide wires
wall thickness
Posted by Glibido at 8:12 AM No comments:

the last and final

At the final stage of the class, we were assigned our final groups in a method that was the most creative and interesting way to devise groups. We met and so far there does not seem to be any major issues between anyone on the team. The questions that were asked of us on the sheet was different, never have I done anything like this before. We discussed what aspects of the other projects we would like to pursue and what we would like to see the project incorporate. Then it was group dynamics, and no one got into a heated debate yet.
Posted by Glibido at 4:19 AM No comments:

The feedback that our group received by the clients from for the powerhouse in my opinion was expected. What was said during the review about the project was a direct response to how the group was functioning and the communication, and it was noticed. Many of the considerations that were stated during the review were aspects that were mentioned during our discussions and were statement that I had directly stated, elements that I considered an issue. Because of the group dynamic, was quickly shot down and was not given any consideration. During the group discussions, I stated that the aesthetic of the piece was mundane and seemed like an afterthought. The fact that the project looked like a square was very unpleasing and it was mentioned but this idea of efficiency was so strong on some peoples mind that any other from was quickly neglected. “What is the purpose of installing this system that is more expensive than just going to the local hardware store and buy a hot water tank for much cheaper.” What are the advantages of this system, there may be some there but they are unclear.” That was summary of what the reviewer said about our project. The advantage of a conventional hot water system to the system we were proposing. Again, I stated that during the discussion, what is the point of proposing this system when a hot water tank was cheaper. Also with the statement of the copper, that it could be stolen from the unit. Is also something that was stated, that we should try to find alternative means and the fact copper is a highly valuable metal, people steal it all the time and also it is extremely expensive. Again, everyone was set on using copper because of efficiency. One of the last statements that the reviewer said about the whole piece as a unit, that what does this thing do, other than give us hot water for a shower. Are the pipes seen, do the run over a window, do we get to see the water flowing. Again this same exact statement was expressed during the meetings. Every single statement to further the project, I stated.
Posted by Glibido at 8:24 AM 1 comment:

It was rather interesting how the discussions that we had within our group was meet by stark opposition y other members in the group and would not budge from their idea. With this happening for two of the meetings before the crunch meeting on Monday were basically the entire project was designed. It got to the point where there really was not any consideration for the esthetic of the project but just to get the project done. That being the deciding factor led to very communication as to what exactly people were doing and the disproportioned distribution of work. Were some people worked till the early hours of the morning in attempt to complete the project was received by little gratification or a negative attitude. Which resulted in a project that was unpleasing to some and not at the hoped expectations. 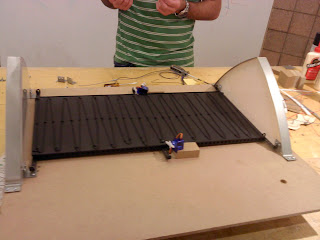 Posted by Glibido at 7:57 AM No comments:

The meeting that we had was less than productive. It was difficult to move forward because the thought process was just going in circles. The issues of aesthetics, efficiency, and should this project be about the spectacle were the main topics of debate. Their were people who felt that spectacle should be integrated in part of the system and simply not an add on, a tag that is placed somewhere in the powerhouse as an after thought. For others, they consider the spectacle as non-relevant. Which then prompted the debate of the actual design of the piece and the efficiency of the project being proposed. Though one project proposed was efficient but aesthetically unpleasing while the other was aesthetically pleasing and not as efficient as the other project and as a plus provided the spectacle. One of the considerations of the project being proposed is that we are completely neglecting the work that was done by the previous group and completely redesigning the project again.
Posted by Glibido at 5:05 AM No comments:

Breaking into the final groups for these projects, and understanding what works and what doesn't. Pulling from past experiences with working in the groups we immediately talked about what we liked and did not like about the previous project. This time though we are not going to try and reinvent the project and what was done in previous weeks, it takes too much time and energy. This time build upon the work that was done. 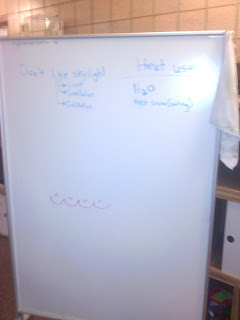 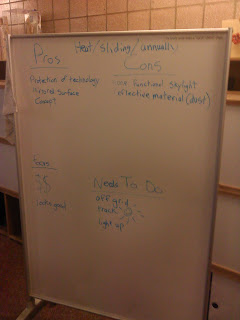 Posted by Glibido at 1:44 PM No comments: 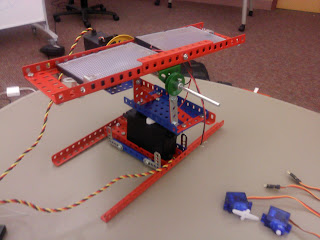 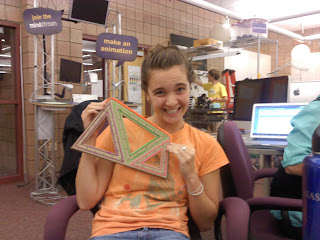 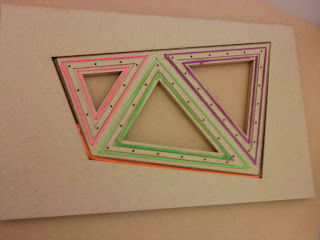